Information and Ticket Link Below 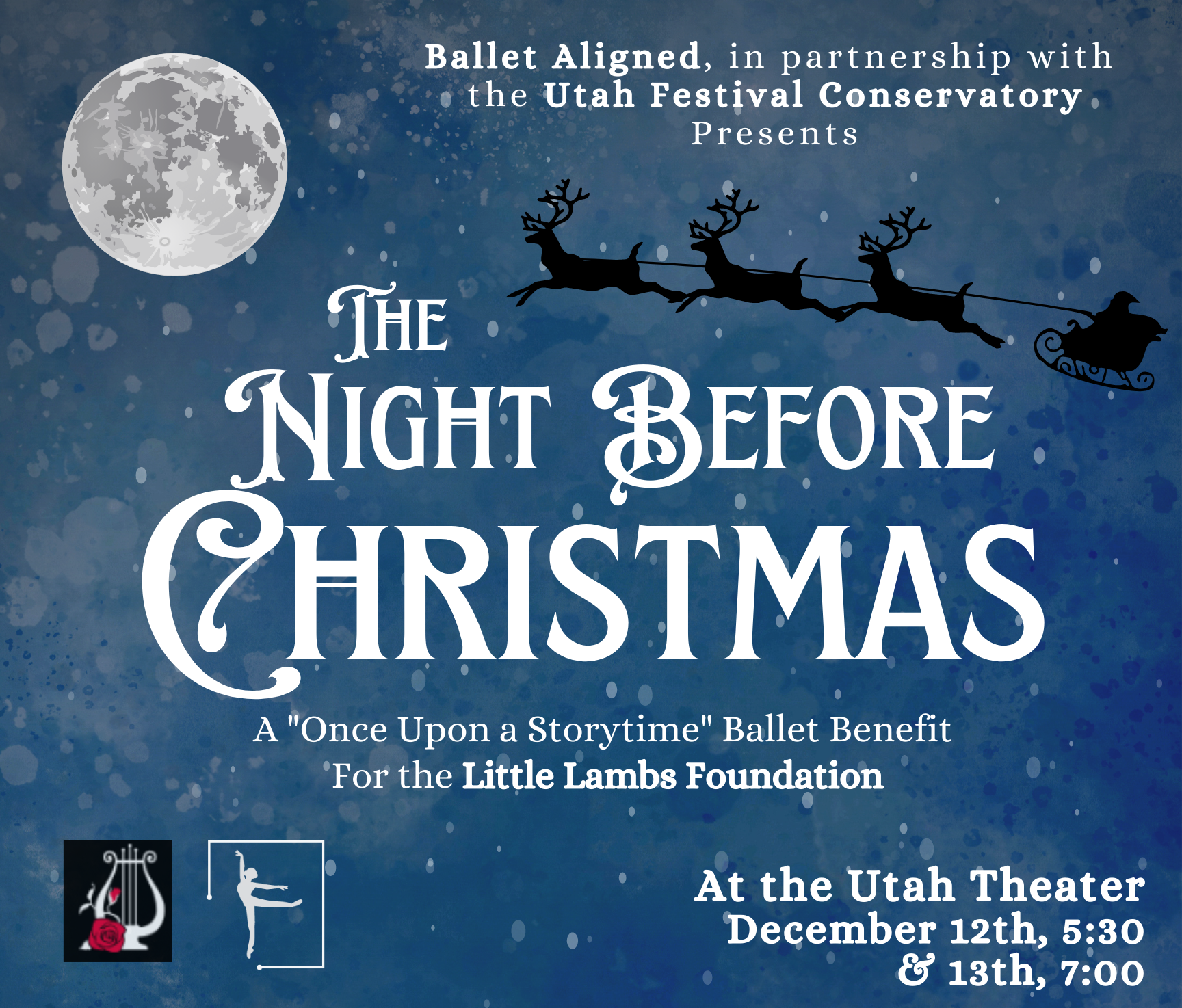 Tickets for general admission seating are $10 in-person (at the Utah Theater Box Office) or $12 online and are non-refundable.

All proceeds from the ticket sales for The Night Before Christmas will go to the Little Lambs Foundation. Their mission is to uplift struggling families and foster youth by providing necessary items that no child should have to go without. They do this by supplying low-income families with diapers, baby supplies, and clothing; assembling comfort kits to distribute to DCFS offices and other partnering agencies for children who are transitioning into foster care and emergency shelters; and providing family hygiene kits to the In-home foster care program and busy kits for children who are hospitalized or experiencing a traumatic event. Little Lambs is a unique service center where community members can volunteer and make a difference. Thank you for your support of this cause!

Ballet Aligned
Ballet Aligned offers professional ballet instruction aligned with industry-relevant standards of beauty and excellence, the dancer's goals and dreams, and family and community values. Their training and free educational and outreach programs reflect the goal to make better ballet more accessible. Believing in the power of art as a force for good in the world, their Ballet Benefits are a way for dancers to share their talent in the community, AND to literally make a difference in the world.

Joel Ackerman
Joel Ackerman is a master story-teller and author of the libretto for our ballet. He has written/produced/directed over 100 videos (ads and other branded video content) which have been viewed nearly half a billion times. He is the Editor in Chief of Print Immortal, a publishing company that publishes “works worthy of immortality” and is also a published author and poet. He currently works as the Creative Director for Angel Studios (distributors of "The Chosen").

Kai Casperson as Clement C. Moore
Kai is the newest member of Ballet West II. He has trained, on scholarship, at the Ballet West Academy for 5 years and as a trainee with Boston Ballet for 1 year. Kai began dancing at age 9. As a student of Steffanie Casperson, he advanced to acceptance at Ballet West Academy's professional division at age 13. Over the years there, he performed a number of leading roles in Academy productions. Kai appears courtesy of Ballet West.

Tayten Baker as Santa
Tayten trained with Ballet West Academy for 9 years. He received the Fredrick Quinny Lawson scholarship and other full scholarships during that time. He has been in many productions varying from classical ballets to modern and contemporary works. Since graduating from the academy, he has worked as an RI for the Ballet West Summer Intensive, and has taught a Boys Ballet class and an adult class for Ballet Aligned.

Chloe McAllister as Clara Moore, the Shepherdess, and Music Box Doll
Chloë's training began at the age of four with Cache Civic Ballet where she danced the leads of Clara in the Nutcracker and Aurora in Sleeping Beauty. As a student of Steffanie Casperson, jury members complimented her YAGP performance as “regal and sophisticated," and she was invited to train at Boston Ballet and Ballet West's summer programs. At the age of 16, Chloë was invited to train with Ballet West Academy’s Professional Training Division and danced a leading role in the Academy production of Coppelia last year. She appears courtesy of Ballet West Academy.

Sabrina Jex as the Scottish Doll
Sabrina trained and performed for five seasons with BYU Theatre Ballet, dancing various leading in both classical and contemporary ballets, including works by famous choreographers including George Balanchine and Paul Taylor. She has a love for creating movement and has choreographed on ballet companies at BYU for both live-streamed and live performances. For the last two years of her undergraduate, Sabrina taught intermediate and beginning ballet classes at BYU.

A Special Thanks to our:

A debt of gratitude to those whose donations of time and talent made this show possible.