It can last from weeks to months, and is just one long fest of being judged by the teachers. Audition season can be one long carnival of depression, or it can be weeks full of excited anticipation.

I’m here to tell you how to not only survive/not get depressed, but also how to get the best results possible. So listen carefully.

This past weekend I auditioned for Houston Ballet, traveling to New York City, then back to my present place of residence, Boston, MA. The most common mode of transportation from these two cities–and usually the cheapest–is the Amtrak train. I woke up on Saturday morning, finished packing all of my things (I realized I packed WAY too much for only one night away), and took the bus to the train station. I grabbed a pre-boarding snack of Dunkin’ Doughnuts and found my seat on the train. 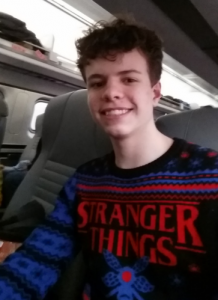 Yes, that IS a Stranger Things sweater. I’m a HUGE fan!

The train ride from Boston to New York takes about four hours: great time to take a nap, get some homework done, read a book, listen to music, or just completely zone out looking out the window (I personally did all of these things in roughly the same order as I listed). One thing that is wise to do, especially if you have pre-audition anxiety, is CALM DOWN. You can do this by deeply breathing (or again, taking a nap!). Find your own way that best suits you. Zoning out really helped with my nervousness.

During my time on the train, I assessed what was going to happen from the moment I stepped off the train. I ran through my mind what trains I was going to catch, what streets I was going to walk down, how I was going to warm up, etc. I also used this time to comfort myself with this thought: even if I have a terrible audition and don’t get accepted, things are going to be okay; I have other options and I can always audition for more places.

This is a helpful thought: Never think that you can audition for one place only. Always leave your options open by auditioning for as many places as you can. Even if you have gotten into a summer program before, it does not guarantee you a spot for the next year. I have many friends who have gone to a summer program, with scholarship even, and the following year they were rejected. So audition for as many places as you can, or audition until you get accepted somewhere.

After my zoning out session was completed, the train arrived at NYC. I had a couple hours to spare before I needed to get ready for my audition, so I decided to take the scenic route through Times Square.

Even though it was as hectic as ever, Times Square was actually pretty enjoyable. Partially thanks to my calm-down time on the train, I didn’t get stressed, which you would think to be very easy with all the honking and jumbo-trons. I visited the Hershey’s store, where I got a free piece of chocolate, but I left quickly due to the fact it was very noisy, crowded, and I wasn’t going to buy anything. I also visited M&M’s World across the street, where it was bigger and even more crowded than the Hershey’s store. Here I couldn’t resist buying something so I got a mixed bag of hand chosen rare M&M’s that was way overpriced. It did provide a nice sugary snack before the audition (I did get an actual meal at Subway prior to this) but I was careful to not eat too much. 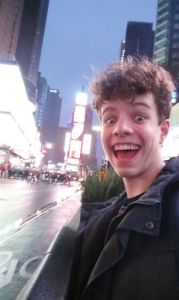 Me walking in Times Square. Craazzy!

After my fantastic adventures in candyland, I walked to the studios. The Alvin Ailey studios were located a couple blocks off of Times Square and so walking there took only a few minutes. After I got there, I got registered, changed, and started to warm up.

I can’t stress enough the importance of warming up, especially for an audition. Not only does warming up help prevent injuries and lengthens your career, but it lets you perform your best even at barre. Instead of using the time at barre as a warm up, you can use it as a time to grab the teacher’s and judges’ attention and that can allow you to be looked at more, which in turn, will help your chances of getting accepted.

The class was taught well and even at barre I felt like I could use a lot of expression in my dancing. This caught the teacher’s eye and I got plenty of corrections and attention from him for the rest of class. He taught the audition like a normal class, the only difference being pauses in between some combinations and specific people being called on to repeat certain combinations. I definitely felt some nerves as the judges would walk past or when I would slip up on a combination, but I whenever I felt nervous or messed up, I took a deep breath and smiled. Doing this led to me having a fantastic class where I demonstrated two combinations, received the most corrections, and at the end of class did a la seconde turns in the center by myself with the whole class watching. The teacher gave a reverence, I shook his hand, thanked the judges, and walked out. 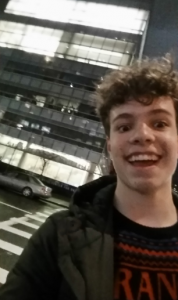 Me at the Ailey Studios

Getting to my family friend’s house (where I was staying for the night) was a bit of a handful. As I boarded the subway, my phone died, but I was able to remember the stop and directions to get there so I arrived safely. After a long shower I went to bed feeling pretty good about my audition.

The time I had on the train ride home was spent reflecting on the audition and my time in New York. I had taken the stressful situations and looked on the positive side: for maneuvering the streets in New York, for the audition, for navigating my way home with a dead phone. And as I’m writing this I realize that throughout life, if we can look on the positive side of things, we will more often be satisfied and happier – happier not only in our dancing and performance, but in the rest of our lives as well; looking at every experience you have and seeing that, even though it may be bad, there is always a bit of good in it.